Elphinstone stampede: If required, treatment will be given at private hospitals, says Girish Mahajan

On Friday morning, an unfortunate stampede occurred at around 10:30 am, during morning rush hour amid a heavy downpour on a foot-over bridge in Mumbai's Elphinstone station, which connects two of the city's major local lines. Girish Mahajan, Medical Education Minister said, if required, treatment will also be given at private hospitals. And the government will bear the cost 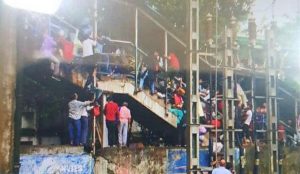 The horrific stampede claimed innocent lives, leaving many injured. “39 patients have suffered minor injuries, due to stampede, they felt suffocated. But they are fine now and will be discharged in a day or two. If required, treatment will also be given at private hospitals. And the government will bear the cost of the treatment,” said Girish Mahajan, Medical Education Minister.

“KEM Hospital received about 22 dead bodies and 39 patients. All 39 patients have been taken care of. Only 2 to 3 are critical who are been looked after,” said Dr Avinash Supe, Dean of KEM Hospital.

He added, “The emergency surgeries have been in KEM Hospital, while some routine surgeries were at hold for few hours, which have begun now.”